The thought of your child walking or running on a treadmill can be scary, to say the least. Not only does that contraption look like it could break down at any given moment, but you also have to worry about your kid’s safety in general. Will they fall? What if they get too close and lean on the belt?

Don’t forget about those long arms flailing around in the air! It’s definitely possible for you to let them run wild on a treadmill, but it’s also very easy for something bad to happen when there isn’t proper supervision or instruction from an experienced adult. Here are some tips and tricks for keeping your kids safe while letting them experience fun cardiovascular exercise. Also, you can look for the Best Treadmill for small spaces.

Start Slow Your Kid Off

The first thing you need to do is let your kids get used to the treadmill. You have probably seen those commercials where a kid hops on the belt, and in less than two seconds he or she is running as though they’ve been training for months.

You’re not going to start out with an intense workout session here. It’s always best, to begin with very low speeds that gradually increase over time. If you give them an inch at first, they will take a mile. Start by explaining why it’s important for them to stay off of the treadmill unless an adult is present and pushing buttons for them. If you don’t say this from the beginning, they might think that it’s perfectly okay for them to run wild whenever they want. 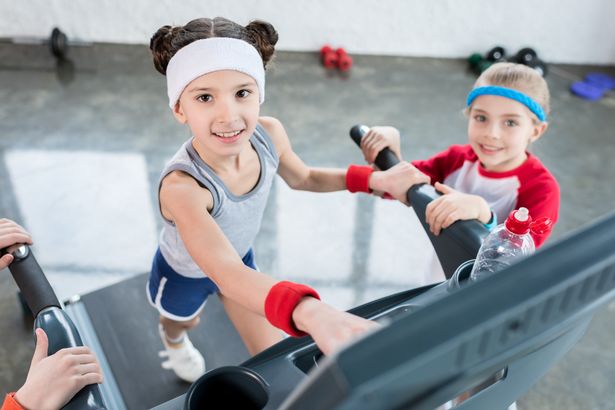 Let Them Run Your Own Routine

Once they get the idea that they are not supposed to be sprinting without adult supervision, you can start to let them run your own routine. Adjust the treadmill accordingly so that it’s at a slow and safe speed. Depending on your child’s age, this could range from two miles per hour or less all the way up to between four and six miles per hour. Now is also a good time to introduce them to how an emergency stop button works just in case something goes wrong.

Let Them Watch You While You Work Out

Since you have already shown them how important it is for them to stay off of the treadmill when you’re not around (and why), now would be a good time for you to take them out for a test run. If you’re all set up to work out, let your child stand beside the treadmill and watch what you’re doing. This might help build confidence in them knowing that they can do it too.

If they feel comfortable watching you work out, maybe even ask if they want to press any of the buttons for you while you run or walk. Take this opportunity to tell them about being careful with each specific button since some might change how fast the belt is moving while others could stop the machine entirely if pushed incorrectly. You should also make sure that they know not to touch any of these buttons unless you are standing right next to them and telling them which one(s) need to be pressed. Doing it this way allows you to supervise their actions and prevent any accidents from happening.

If They Get Too Close, Pull Them Back

Always keep a safe distance between them and the actual treadmill belt. This will help prevent them from falling or getting their long arms stuck in between the moving parts of the machine. Be sure to pull their hands away if they try to place them on or near the belt for any reason. Most treadmills have safety rails attached for this specific purpose. If not, then be sure that you are using your body as a shield so that nothing bad can happen to them when you’re both working out at the same time (see #1). It’s also wise to always watch what they’re doing while you run so that you can pull them out of harm’s way if they are getting too close to the belt.

Are They Ready to Start Running?

Once your kids seem comfortable with the idea of being around a treadmill, but without actually running on it themselves, then it’s probably time for you to take things up a notch. It could be as simple as adjusting their starting speed so that they aren’t walking anymore and are now in the two-mile-per-hour range or less. This is still well below what an average adult will run on this same machine, but remember that your own child might not have been exercising or moving much at all before they started. Start slow and make your progressions based upon how many minutes they’re able to work out on their own. If they can’t handle it, then you should stay where you are until your child is more comfortable with the new speed and routine.

This might take a few days or weeks to accomplish depending upon how long they have been sedentary. But slowly building up from one level to another is much better than trying to force them into a workout that’s too fast for them to complete without getting hurt. These types of changes will be very noticeable if done correctly since both you and your child will be able to see what improvements have taken place over time.

When They’re Ready, Pair Them Up With an Adult

Sometimes just watching someone run on the treadmill can inspire kids to feel like giving it a try themselves This is a great opportunity to teach them about running in place while you run on the belt. Start off with very low speeds and get their feet into the rhythm of what it feels like to run (without actually going anywhere).

After they’ve had enough time to practice this new skill, then you can ask if they’d like to try a 1-2 minute burst of actual running with you. Remember that learning how to slow down is just as important as learning how to speed up – especially for young kids who might not be able to control themselves once they get started. Also, remember that one or two bursts are all that’s required since “some activity is better than no activity” at all! If your child had fun doing this, then maybe next time you can do this with them and the two of you can be the one(s) running together.

These tips will help kids learn how to use a treadmill without being too risky or hazardous to their health. The most important thing is that they are having fun while doing it. If they aren’t, then they won’t want to come back for more! And if you’re really worried about your child getting injured on a treadmill due to any reason, then it’s probably not worth taking the chance at all.