What is the Baby Boomer Gen?

The large size of the baby boomer gen. has caused them to shape the culture of America first as a youth culture in the 60’s and 70’s and again in the 21st century as they become a very large aging population. Baby boomers have a long history of political activism.

The baby boomer gen. Is one of the shortcut ways of referring to the massive generation born in the good times of post WWII America. Baby boomers were so called because there really was a boom in the birthrates starting in 1946 when the number of babies born jumped 22% over the previous year. This higher birthrate was to be sustained for the next 19 years before dropping again and creating the Generation X group.

Baby boomers were the largest generation to date when they were born and created a youth culture because of their numbers. With a population of about 78 million, the baby boomer gen. Is now beginning to create a senior citizen’s culture as they move into retirement age at the rate of ten thousand each day. 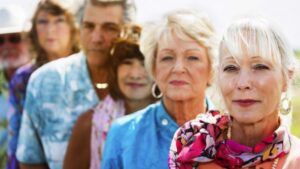 So, who pays attention to the Baby Boomer Gen?

When they were children, baby boomers created a huge demand for more schools, more parks, and more means of entertainment to meet the needs of their large ranks. As they age, boomers will create new demands on society that will be at least as challenging as those of their childhoods.

The baby boomer generation was born into a time of prosperity and this allowed for the larger family size that produced them. Benefits extended to veterans allowed more and more middle class families to be home owners as well as allowing many vets to attend college on the GI Bill. Baby boomers were more likely to have college educated parents and the expectation that they themselves would also attend college.

One of the most significant events in the early adulthood of baby boomers was the outbreak of the war in Vietnam. While naturally some boomers volunteered, others entered college in large part to avoid the draft at least until graduation. While some baby boomers had been involved in the civil rights movement, many more became embroiled in the protests about the Vietnam War.

This caused a great deal of friction with the boomers and their parents’ generation who were not that long removed from WWII in which few questioned the legitimacy of the conflict. Baby boomers who opposed the war felt like it was the moral choice while their parents voiced concern about their perceived lack of patriotism.

This political activism in baby boomers was not to end with the war in Southeast Asia. Boomers continued to be activist in causes such as reproductive rights, women’s rights, environmental issues and campaigns for elective office. Many saw the baby boomers as part of a counter cultural revolution that challenged the mostly traditional and conservative views of the WWII generation. As boomers now approach retirement age, it is likely that they will also be proactive in seeking what benefits an aging population.